The Politics of Food at SOAS

Last week, I facilitated a discussion and dinner on the Politics of Food on behalf of the Israel Society at the School of Oriental and African Studies (SOAS), London. We ate, we chatted, we ate some more, then we chatted some more... 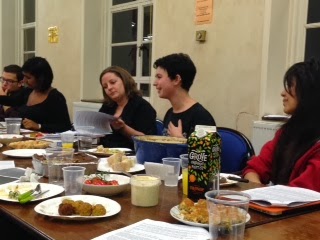 Among other things, we discussed:
Attendees brought their own dishes and/or recipes, and shared their personal stories about what makes those dishes meaningful to them and their families.

The event was partly inspired by two fabulous and informative cookbooks, published in 2012:

Several of the questions we discussed arose out of the conversations between El-Haddad, Schmitt and Ottolenghi in Bon Appétit magazine:

The event was open, inclusive, critically engaged - and tasty!
Posted by Rebecca Steinfeld at 11:27