Over the last two days, I participated in an inspiring and enriching conference on Female Genital Mutilation/Cutting at the Geneva University Hospitals. There, I met so many incredible people working so hard on such complex issues.

I also shared some of my bioethicist colleague Brian Earp's and my research on whether efforts to eliminate female genital cutting could be strengthened by extending protections to male and intersex children. We created and displayed this eposter to summarise our analysis and arguments: 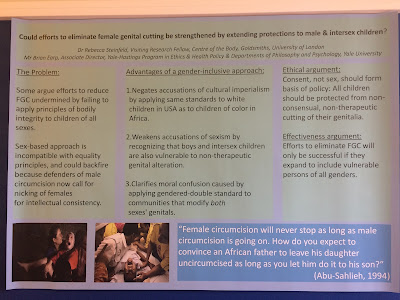 In my presentation, I recognised that comparing female genital cutting with male and intersex genital alteration is controversial. At the same time, I emphasised that there are significant areas of overlap between these practices that necessitate reconsideration of their divergent ethical statuses and policy treatments.

I explained that some argue that efforts to reduce FGC are undermined by failing to apply principles of bodily integrity to children of all sexes. While a sex-based approach is incompatible with equality principles, it could also backfire because some defenders of male circumcision call for 'nicking' of females' genitalia for intellectual consistency. Essentially they're seeking to 'equalise down' by rolling back existing protections for females.

By contrast, Brian and I have identified three advantages of a gender-inclusive approach:
We quoted the Swiss lawyer Sami Abu-Sahlieh, who said: “Female circumcision will never stop as long as male circumcision is going on. How do you expect to convince an African father to leave his daughter uncircumcised as long as you let him do it to his son?”

Finally, we made two arguments for extending protections to male and intersex children. The first was an ethical argument, namely that consent, not sex, should form the basis of policy: All children should be protected from non-consensual, non-therapeutic cutting of their genitalia.

The second was an effectiveness argument: That efforts to eliminate FGC will only be successful if they expand to include vulnerable persons of all genders.

Participants' reactions to our analysis were very encouraging. Everyone was enthusiastically and vocally supportive of the need to apply principles of bodily integrity consistently to children of all genders.

Thank you to the organisers for providing the space for this important conversation. Here's to many more discussions like this!

Posted by Rebecca Steinfeld at 11:29